András Nagy – The possibility of improving…

The involvement of public resources in microfinance is more than desirable – this is the summary of the studies published in a recent English-language paper, which aims to clarify all misunderstandings regarding the essence of microfinance. The publication of the ERENET scientific research group is available at http://www.erenet.org/publications/profile52.pdf

The Entrepreneurship Research and Education Network of Central European Universities (ERENET) group dedicated a publication to microfinance – importance and recent studies from Europe.

A lot of microfinance institutions operate around the world with different methods and results. Due to its expected positive social impact, more and more public money is allocated for microcredit activities by the individual member states and the European Union itself. The authors – acknowledged European experts of microfinance – would like to bring this activity and the underlying “professional secrets’ closer to the readers.

A remarkable study, by the expert team of Microfinanza, is analysing the impact assessment and management of microfinance programmes. Microfinanza proposes a simple methodology and data collection for impact assessment method which can be used by microfinance providers in their daily work. Impact measurement, its analysis and management, will become a key component in reporting comparable and reliable non-financial information – underline the experts.

Microcredit is a special area that is becoming more and more widespread in the field of business financing. It basically means lending money to people who want to make a living from their own income-generating activity but are unable to obtain small loans from commercial banks – that is the main players of the financial market – to finance their activities. There are those who bless it and there are those who curse it, but the majority of people completely misunderstand the essence of this activity. A lot of microfinance institutions operate around the world with different methods and results. Due to its expected positive social impact, more and more public money is allocated for microcredit activities by the individual member states and the European Union itself. The authors of this publication would like to bring this activity and the underlying “professional secrets’ closer to the readers.

UTILIZATION OF PUBLIC MONEY IN MICROFINANCE

– teaching principles and practical issues in the international training of experts –

As microcredit – in which the European Union itself invests substantial amounts – is becoming an increasingly widespread activity carried out by tens of thousands of organizations around the world, there is a growing demand for training professionals at higher level. In response to these needs, the University of Cádiz in Spain and Fejér Enterprise Agency, which has decades of professional experience and is recognized internationally, have developed a fully online postgraduate programme, upon the completion of which one can obtain a MASTER’s degree accredited in Spain.

One of the main modules of the Master’s course launched under the title of MICROFINANCE, HUMAN RIGHTS AND DEVELOPMENT COOPERATION is “Microfinance”.

By completing the module independently, students will receive an international microfinance expert certificate. The extensive curriculum introduces the various types of microcredit, its microeconomic background and the practical issues related to the implementation of the specific microcredit programmes.

This knowledge could be useful for people working in the field of microcredit and for professionals working with public money, especially for those working in decision-making positions.

In my article I will present some important principles concerning microcredit based on the curriculum of this course.

The phenomenon described as the crisis of the microfinance sector is well-known in many countries of the world. In certain countries, the majority of microcredit clients viewed microcredit as a tool that contributed to their insolvency instead of improving their material well-being. That is why a lot of clients committed suicide. Also, a lot of protests were organized against microcredit, and coalitions were set up demanding the ban of microcredit.

The above-mentioned detrimental social phenomenon cannot be explained with the crisis of the sector due to the fact that there is no uniform microfinance sector.

This phenomenon is a consequence of a natural market process called market mechanism. Putting it simply, the point is that in markets where there is a lot of disposable income continuously, supply is likely to appear, which entails price equalization. If supply fails to appear and no price equalization takes place, it is classified as market failure. 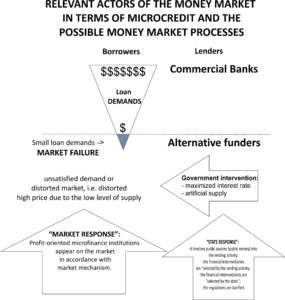 Examining the phenomenon further, we can state that the extremely diverse microcredit activity that is present in the world can be basically classified as follows based on the type of socio-market response given to the mentioned market failure:As illustrated in the figure, the majority of borrowing requirements appearing on the financial market are satisfied by the Commercial Banks. At the same time a great part of the small loan requirements having relatively high costs and risk remain unsatisfied, and market failure occurs. According to market mechanism, a supply appears on the side of the alternative profit-oriented microfinance institutions, but due to its limited nature the demand-supply equilibrium described earlier is not fully achieved. As a result, there is a high level of unsatisfied demand and distorted high price. In a best-case scenario, the state intervenes in accordance with the concept of sustainable society. On the one hand, it limits the maximum interest rates with administrative and legal means, and regulates the operation of microfinance institutions. On the other hand, it creates artificial supply with the involvement of public funds (public money). It sets up revolving social microcredit funds from public sources, from which (ideally non-profit) microfinance institutions selected thereby perform microcredit activities. 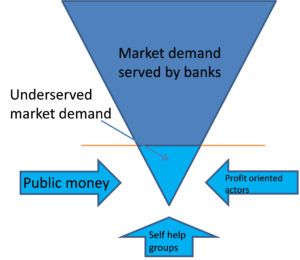 It is absolutely obvious that we have to differentiate among the three operating-financing types, and in particular between non-profit microcredit schemes (e.g. programmes funded from public money or donations) which aim to achieve social objectives and programmes serving the interest of investors (speculators). At the same time we must point out that the non-profit and for-profit financing fields operate according to completely different principles, operational goals and standards as well as social expectations , therefore no uniform standards may be applied for their operation.

The curriculum of the aforementioned University of Cádiz mainly describes the operation and features of the self-help groups organized on the basis of the model of Muhammad Yunus (Nobel Peace Prize Laureate, economist), which is presented by Jaime Duran Navarro, Honorary President of the Spanish Microfinance Network, former Vice-President of the European Microfinance Network, and university lecturer. I present the necessity of governmental intervention, its basic principles, professional background and characteristics as well as the practical issues related to the creation of programmes with my colleague, Péter Vonnák.

Where public money and community resources are used to satisfy a social need or to tackle a social problem, it is always advisable to follow the logical steps below:

In our case the social problem is that certain social groups do not have or have only limited access to loans granted by commercial banks, from which they could finance the launch or development of an independent economic activity supporting their and their family’s subsistence.

This reduced creditworthiness could be attributed to:

Although the scale of this social problem (social need) varies from country to country, it can also be detected in the developed industrialized countries continuously.

The need for microcredit as a social need and the importance of meeting such need are illustrated in the figure below. 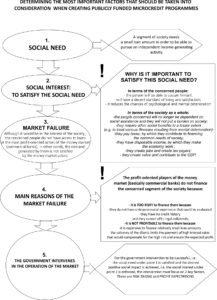 The main reason for MARKET FAILURE (no supply appears to the demand that would balance the prices, no equilibrium price is achieved) is that the high CREDIT RISK IS NOT ASSUMED by the main players of the financial market (e.g. commercial banks). Also, the solvency of the affected customers does not allow for the compensation of the expected high CREDIT LOSSES, and the expected revenues do not fully cover the OPERATING COSTS. (As mentioned earlier, they cannot satisfy the PROFIT EXPECTATIONS of the shareholders of the banks either – under normal operation –, and in most countries the banking act does not allow such risky funding in order to protect the interests of the depositors and shareholders.)

Accordingly, to achieve the desired positive social impact the high risk associated with lending must be assumed by the state, in other words, clients not having an entrepreneurial past that can be evaluated, or not having adequate legal collaterals should also be able to access the sources. As a result, it must also be accepted that the revenues coming from the lending activity will probably not cover the credit losses and the operating costs fully.

When setting up a new publicly funded microcredit scheme, in terms of the achievement of the positive social goal it is crucial WHO BEARS THE RISK OF LENDING (how credit risks are accounted for and financed), and WHO AND FROM WHAT SOURCES COVERS THE OPERATING COSTS.

Funding the socially important target group of microcredit poses very high credit risk. Therefore, every circumstance that forces the key actors of the microcredit scheme to AVOID THIS HIGH RISK prevents the programme from channelling the sources to the target group.

In case of publicly funded microcredit schemes the return on the funds made available must be achieved on a wider social level and not on the level of sources made available, in accordance with the criteria set for sustainable society.

According to the Declaration issued by the World Academy of Sciences: ‘Sustainability is the satisfaction of current human needs through preserving the environment and natural resources for future generations’. The most important criteria and the essential requirements of a sustainable society are:

The quality of life includes health – the complete physical, mental and social well-being – and in connection therewith material well-being, healthy environmental conditions, democratic rights, safety and education accessible to all.

The objective for ensuring decent living conditions, suitable quality of life and well-being applies to everybody, to the future generations as well.

A systemic approach and governance are inevitable for the implementation.